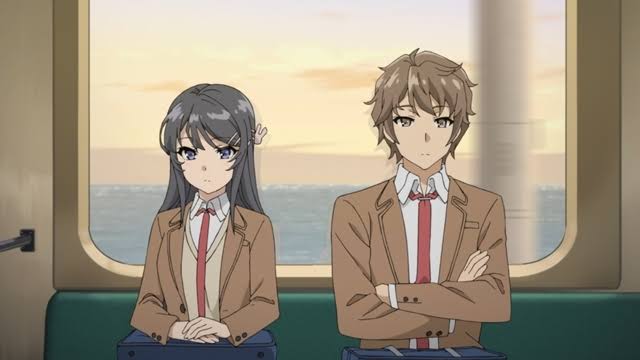 When Hajime Kamoshida's light novel series Seishun Buta Yaro was given an anime adaptation in 2018 by CloverWorks, most people outside of Japan had never heard of it. It had been serialized in the popular magazine Dengeki G's Comic in 2016, but its international reach had been minimal at most. Thus, when it premiered and quickly rose in popularity, many were confused as to how this show was performing so well. How could a show about a bunny girl be hailed by critics as "full of mystery and intrigue" and "one of the gems of 2018"?
Bunny girls became a worldwide sensation after Playboy became infamous for their waitresses dressed in the attire, and Japan was no exception. Unbound by the copyright restrictions in the west, the costume became extremely popular in manga, anime, and cosplay. With its provocative and seductive connotation, you would expect "Rascal Does Not Dream of Bunny Girl Senpai" to be intended for more mature audiences. However, this is far from the truth. The slice of life follows Sakuta Azusagawa, after he meets the teenage actress Mai Sakurajima in a library. Despite her wearing a bunny girl outfit, she is not noticed by anyone else there, due to a phenomenon called "adolescence syndrome". Our main character decides to investigate this mystery, and begins to help others who suffer from the same issue. To avoid spoilers, I won't go into any more detail regarding the story, so give it a watch to find out more. The true beauty of this anime lies in its ability to create real, genuine characters. Often in these types of stories targeted toward teenagers, we find the same archetypes recycled over and over again. You begin to feel that you are watching the same cast of characters, just with different appearances and circumstances. While Rascal may borrow from some of these well known character tropes, there is a depth in the storytelling that I didn't even realize I was looking for. Sakura is not just your run of the mill, edgy perverted protagonist. He is essentially raising his younger sister on his own, and genuinely cares for the people around him. Mai is not a typical cold tsundere who steps all over others. She just matured at a young age because of a childhood spent in the spotlight, and shows her affection in a more methodical way. The other characters are written just as beautifully, and actually feel like real people. Comedically, I can't say I've found a show this funny in a while. I love their brutal honesty, and the way that the characters interact in order to create great moments. On top of that, the way this show approaches romance is extremely refreshing. It is not overly dramatic or avoided, and I love it. The romantically involved characters don't spend ten episodes mustering up the courage to confess, or treat holding hands as if its an act of marriage. Instead, they are honest with their feelings and communicate it in typical high school fashion. They don't obsess over each other, and are able to live their lives as separate people, while still spending quality time together. "Rascal Does Not Dream of Bunny Girl Senpai" represents everything that a slice of life anime should be. The characters are genuine human beings. The story is intriguing, and can make you laugh or cry. In all honesty, it is really just a great show. There is only one season as of now, and it ends rather ambiguously. There is no explosion, or pretty bow that ties it all together. However, when I finished watching it, I felt as if I had just watched anime for the first time again.
Previous Post
Quick View